You are here > Attending > Things to do > Everyman Mailbox Birmingham 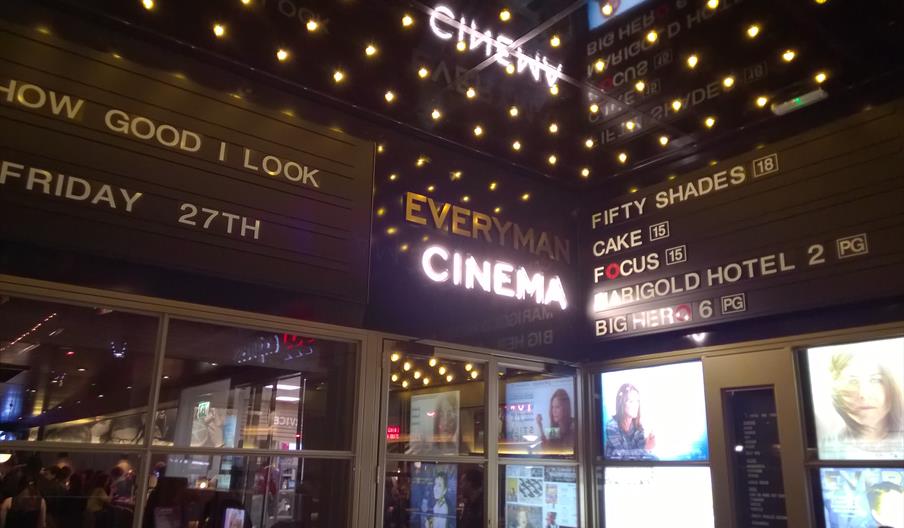 Here's a blog we wrote about Everyman Cinema

If you’ve been fortunate enough to read any of my other blogs, you’ll know that aside from being uncommonly modest, I am also a bit of a film fiend – so I was beyond excited for the opportunity to visit the Everyman Cinema in The Mailbox.

This boutique chain is held in high regard around the country. I knew that Everyman was going to be excellent, but my goodness - within two minutes of entering I had my sofa assigned, a large Malbec in hand and a house burger en route to my sofa – this place is A-MAZING. Attentive staff is an understatement and as I tweeted from the field last night - this place would win an Oscar for customer care and comfort.

In my case it really was Everyman for himself as I was in attendance on my own. Sensing my isolation the duty manager took pity on me and escorted me on a tour of the lounge bar – a contemporary space this is perfect for meeting friends/loved ones for a pre movie aperitif or as I would do, a post movie hangout for a deconstruction of the film – I always like to discuss a film's merits or otherwise once the credits have rolled.

The lounge is suitably cool and grown-up with large black and white montages of film stars past and present adorning the walls. The low lighting added to the chic vibe this place successfully aims for and achieves. The foyer was full and lively - the bar is well stocked with craft beers, wines, coffees, cakes and the food menu is as equally impressive.

On my way to the venue, I had had my heart set on obtaining a hot dog, but on the waiter’s recommendation I ordered the house burger, chose my cheese, I went for blue (naturally) and sat down to soak up the atmosphere. Now, did I want my burger now or delivered to my sofa just as the film is starting? I chose the latter, as I feared that being on my own I was almost certain to miss my mouth or spill some - the cover of darkness would be ideal.

I was soaking up the ambience, sending out a tweet or two about the merits of my experience so far when the staff informed me my film would be starting shortly and would I care to take my seat..err I mean plush sofa. The film you ask? Taken 3 - not usually a film I would choose to go and see, but it is testament to the surrounds that this ranked amongst the most pleasurable cinema experiences that I had ever encountered.

My two seater sofa (they’re all sofas here) had throw cushions, a foot rest, my own little table and a wine cooler. I estimated, bear in mind it was dark, over 120cms of leg room, I stretched out and sunk down into my seat. It smelt of new carpet – which evoked childhood memories of trips to Allied Carpets – but only for a split second because what’s that *sniff sniff* through yonder door cometh – why it’s only my house burger! Oh this place is good. A Brioche bun, pure-bred Aberdeen Angus beef, and house sauce – yes it was as delicious as it sounds.

On reflection, the auditorium (I was in screen 2 in case you wondered) was akin to one of those private screening rooms of the stars you see on MTV Cribs - albeit on a larger scale. The cinema has three screens altogether of varying size; it was large yet intimate and not overtly tiered. You hear nowadays that some people download movies to watch in the comfort of their own home – I’d place good money on your lounge being not as comfortable as this.  The projection kit too is top drawer – we’re talking the latest Sony 4K digital projectors and Dolby 7:1 sound. I can also attest that the loos are also rather swish schwoo.

Everyman also has some neat touches that are not immediately obvious - Non rustle carton for your popcorn ma’am? Are you one of those people who hate the house lights coming up before the credits have finished? None of that here sir. Also, if you’re more into Powerpoint than Grosse Pointe Blank the cinema is available for corporate hire and the manager told me they already had a number of bookings for this very reason. I can see why. It would make a great space for a seminar.

My one chagrin was my excitable sofa neighbours, but this would be short lived... Much like Liam Neeson, Everyman’s staff had a very particular set of skills; in this case crowd control. They did look for them, they did find them and they kille – no,no – They had a quiet word and nipped their ramblings in the bud. Please, dear blog reader do not think this is in anyway indicative of the clientele at the Everyman Cinema these guys were (and who could blame them?) overly excited by their surrounds...the rest of the patrons were a wholly respectable bunch.

An adult ticket is priced at £10.95 +bf and a child £9.50 - this is, in my opinion, completely justified. I for one will be frequenting here more than I should and if you are a resident or a visitor I implore you to go as soon as you possibly can.

I’ll surmise my experience in this admittedly rather rubbish Haiku...

Taken 3 what pish
but the place was uber plush
and the food...well...lush